Successful Investing: It’s not all about the money…

A study by McCormick, Walkey and Green (1986) found that over 80% of people think they are above-average drivers. Clearly this makes little sense as only 50% of us are better than average at any given task.

Similarly, hundreds of thousands of people play the lottery every week despite the fact that the odds of success are virtually zero. We all believe on some level that we have what it takes to defy the odds and it is in our human nature that we tend to overestimate positive outcomes and underestimate negative ones. 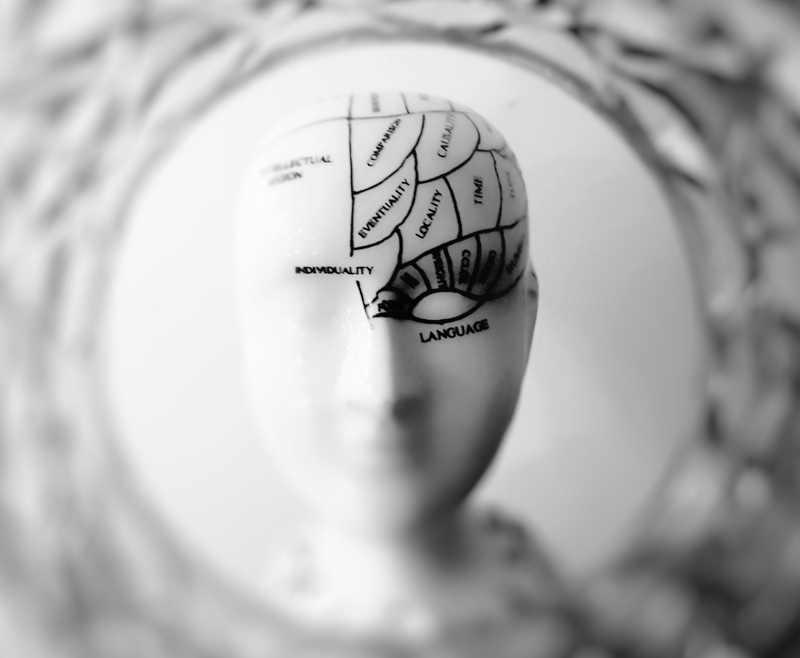 A study by McCormick, Walkey and Green (1986) found that over 80% of people think they are above-average drivers. Clearly this makes little sense as only 50% of us are better than average at any given task.

Similarly, hundreds of thousands of people play the lottery every week despite the fact that the odds of success are virtually zero. We all believe on some level that we have what it takes to defy the odds and it is in our human nature that we tend to overestimate positive outcomes and underestimate negative ones.

Flaws like these in our decision-making process are known as cognitive and emotional biases and they are present in everything we do. Human beings are not designed to behave rationally so it is only by understanding what drives our decision making that we can learn to control our behaviour and improve the choices we make.

The graph below shows average returns of various different asset classes over the past 20 years, compared with the average investor returns over the same period:

It is well documented that the basic foundation of successful long-term investing is placing your money in a well-diversified (mainly stocks) portfolio and leaving it there to grow, untouched. The graph below shows the evolution of a $1 investment over the past 30 years in each of the main asset classes: 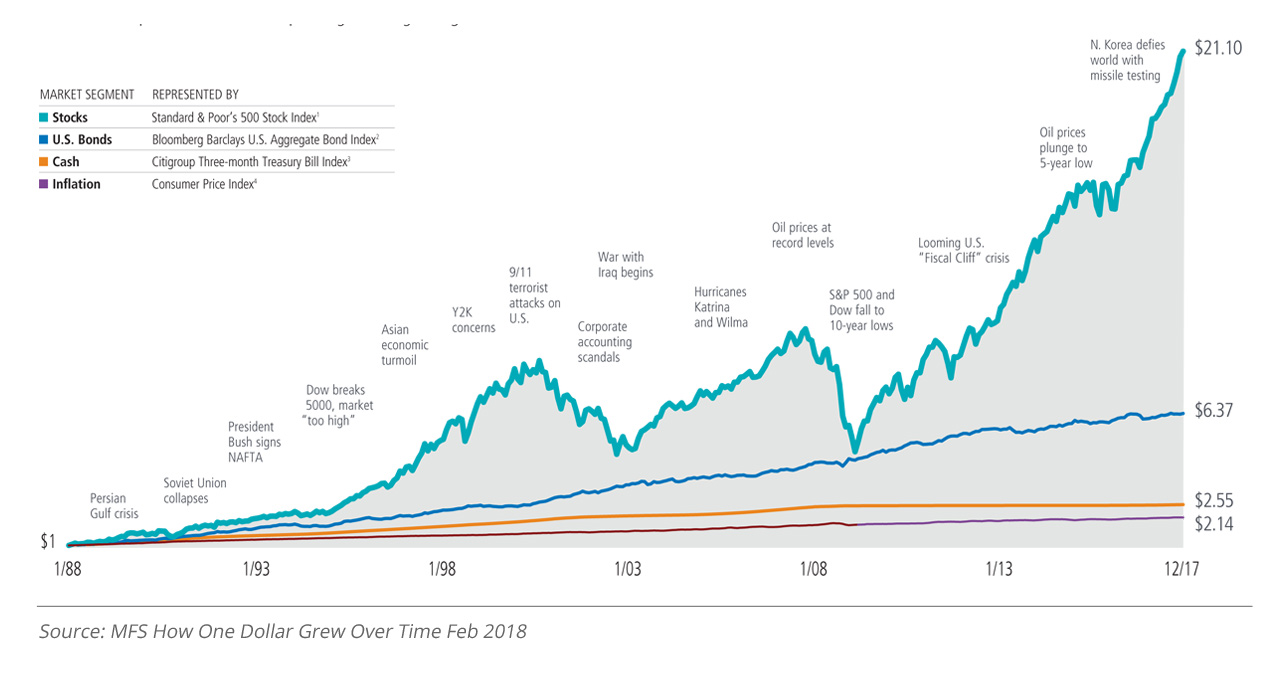 $1 invested in the S&P 500 in 1987 would have grown to over $21 today for patient investors that followed the basic rules and resisted the urge to interfere and make changes along the way. However, very few of us can boast these results.

Whether we are conscious of it or not, we view the world through a number of filters that are defined by our previous experiences and the opinions of those around us. This is perfectly natural and something that impacts on all our daily actions. It is these behavioural patterns that also guide our investing actions and invariably lead to us making costly decisions.

There are 2 main types of behavioural biases, Cognitive and Emotional:

A cognitive bias is a mistake in reasoning. Put simply, it is when we make a bad choice that we think is a good choice. On the surface a decision might appear rational but in fact our flawed thinking process gets in the way of logic and skews the outcome. For example, if all of your friends believe something, you’re much more likely to believe it as well.  That’s not a very rational basis for believing something, but it is something that almost everyone has experienced at some point.

An emotional bias is when we make a decision based upon feelings rather than fact. Emotional decisions are usually driven by intuition or impulse rather than logic and the decision we make can vary depending on our mood at that moment. When we’re stressed, we fixate on risks and ignore opportunity and when we’re excited, we ignore risks and fixate on opportunity. For example, the winning roulette player who continues playing because they believe they are ‘on a roll’ when in fact the odds are stacked against them.

It is very difficult for us to be unbiased in our decision-making but we can mitigate our biases if we know what to look for. Here are the key cognitive and emotional biases that need to be understood and controlled to ensure successful investment decision-making:

Confirmation Bias: Through selective filtering we tend to seek people and information that support our own opinions and disregard anything that contradicts them (regardless of how strong the evidence is to the contrary). An example in personal finance may be a particular type of asset that you own or invest in (e.g. property) and you only look for information that confirms your positive views on that investment, despite other arguments to the contrary.

Anchoring: We often put too great an emphasis on the first piece of information given to us (the anchor) about a particular subject and we make all our subsequent judgements around that anchor. e.g. we see a discounted sale price and we perceive it to now be great value, even though it may actually still be overpriced – we compare it to the original price (anchor) rather than the actual value for money it represents. In investing, an obvious anchor is a previous share price and the reluctance to buy or sell at a price that varies significantly from that anchor. In reality, what has happened in the past bears little significance and the price should be viewed in the context of today, not the past.

Negativity Bias: When we put more weight on bad news than on good. For example, despite the fact that major stock markets tend to have positive returns 75% of the time, many people focus on the possibility of temporary downturns as a reason not to invest, when in fact they are fairly infrequent and limited in duration.

Outcome Bias: Tendency to evaluate a choice on the basis of its outcome rather than the process upon which you made the decision. You may have made a decision for all the right reasons but due to factors out of your control the outcome was negative. Conversely, you may have had a positive outcome of a decision by pure chance – just because a stock investment went down in value doesn’t necessarily mean it was a bad decision and should not be repeated. Equally, a successful investment that was based upon a tip from a friend may have worked out positively but that process should not form the basis of your long term financial planning.

Self-attribution Bias: Closely linked to outcome bias. This is where we attribute successful outcomes to our own actions and convince ourselves that bad outcomes were due to external factors.

Hindsight Bias: Believing that the onset of a past event was somehow predictable and completely obvious when, in reality, the event could not have been reasonably predicted. In investing this often manifests itself in the belief that a recent market correction should have been easily foreseeable when in fact it is only the benefit of hindsight and new information that gives us this clarity.

Overconfidence Bias: “I have an edge that you (and others) do not.” A person with overconfidence bias believes that their skill in a given area is better than that of others’. This may be fuelled by a past success that may or may not have been as a result of the said skill. In investing it is important to acknowledge when an outcome has been due to circumstance and when it was genuinely down to personal influence – Just because you took a speculative position on Bitcoin 5 years ago, it does not make you an investment guru…

Regret Aversion Bias: Wanting to avoid the feeling of regret experienced after making a choice with a negative outcome. For example, the reluctance to sell losing investments to avoid confronting the fact that you have made a poor decision.

Loss Aversion/Endowment Bias: When we form the idea that something we own is more valuable than it actually is. We may hold on to an investment far longer than we should through fear of realizing a loss and the irrational hope that it may return to a previous value. It is also common that people over value the assets they own (e.g. their houses).

This list is by no means exhaustive, it is merely a summary of the biases that most commonly impact our financial decision-making. Most of us, if we are honest with ourselves, will acknowledge the presence of some or all of these in our own behaviour. The first step to being a successful long-term investor is to identify our own natural biases and learn to control them. Once these tendencies are understood, they can be effectively managed to greatly improve the quality of our financial decision-making.